Is Gym-Timidation Real and What Can You Do About It? 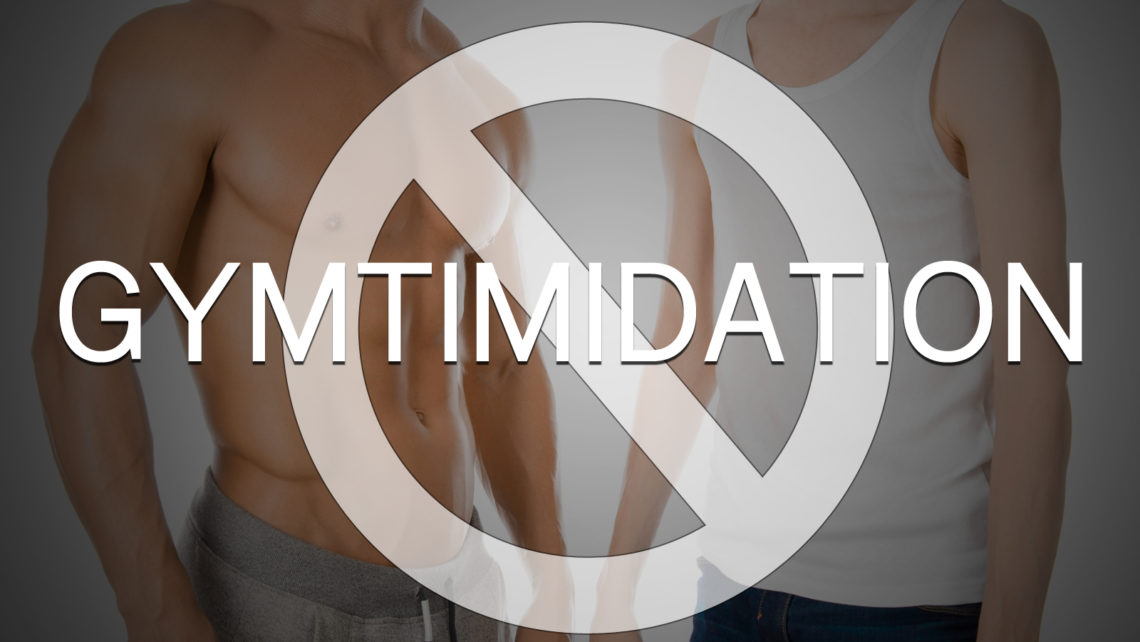 Gym intimidation, or “gym-timidation” is the core marketing concept of Planet Fitness, a popular North American fitness center known for banning bodybuilders because they intimidate other members. They ironically call their club a “judgement free zone”. It’s ironic because they have caricatures of bodybuilders around the gym looking like an angry, uncontrollable Hulk, commercials making fit women out to be air headed bimbos, and a “Lunk Alarm” they sound off if anyone exerts themselves so hard they have to breath heavily. Making fit adults out to be undesirable people seems more than a little judgmental if you ask me. It is very obvious that Planet Fitness is a gym for Average Joes, and once someone begins to become athletic enough that they start becoming noticeably lean and muscular, they no longer want them around because it can make those who are less in-shape feel bad about themselves. They even take equipment steps to ensure this by keeping the available weight to lift to less than half that of other fitness centers, as well eliminating barbells.

Now the last time I checked, the gym was a place where everyone is supposed to be working on improving themselves. I also seem to remember that the point of exercising is to “get into shape”. Why is it then that so many people don’t like for there to be in-shape people at the gym? We can all probably name more than a few people who would love to look like the cover model on a magazine, but also complain that cover models look too much like models and not enough like they do. It’s like everyone wants to be fit but hates when someone is more fit than they are.

Regardless of what people want for themselves but not for others, gymtimidation is a real problem. A lot of people, many of which truly want to be a regular gym-goer, simply feel uncomfortable at the gym. They may feel unsure of what to do, worried they might hurt themselves, distressed about how long it might take before they see results, but by far the biggest complaint I hear is they feel intimidated by those around them. Not the other Average Joes, but the younger, slimmer, and/or more muscular ones around; i.e. the ones that stand out. Just like the magazine cover models, it’s the smallest fraction of the population that stir up the most emotion from everyone else.

Some, however, are inspired by these individuals, rather than intimidated. These people know they want to look more like these so-called gymtimidators, so they derive motivation to work harder, stay longer, perhaps even do some of the same exercises as these more in-shape individuals. Rather than draw negative feelings that stem from envy, they choose to see others’ success as a positive source from which to remind themselves what it is they are working for, and potentially the guidance of what it takes to get there.

If some find these fit people inspiring, yet others find them intimidating, how is it possible to label them one or the other? Are some of these gymtimidators going around yelling at fat people to make them feel bad? Are their grunts not reflexive consequences of lifting heavy weight but rather intentional audible insults meant to scare new-comers away? Does everyone start out as a humble, educated Average Joe but turn into a cocky, dim-witted blockhead once their body starts reflecting the athleticism they have worked for?

The fact is, fear is in the eye of the beholder. The only person that can decide that someone is being intimidating is YOU. If a member actually goes out of his or her way to intentionally intimidate you, I can promise ANY gym would warn that member not to let it happen again, and if a second violation was reported they would kick that member out. No gym is a place for violent, dangerous, or intimidating threats to be made. If, however, you feel intimidated just because some girl at the gym is wearing a tight outfit that shows off her athletic figure, it’s up to you to decide how that makes you feel. Same goes for someone near you who is stronger, has better form, a nicer outfit, etc. You can’t pick and choose the people around you, neither in public nor in a gym. If the sight of people further along in their fitness intimidates you, that is entirely your problem. The same people who complain about gymtimidation love to blame the gym and its members for their feelings, and that’s not only entirely unfair, it’s quite disreputable.

Imagine that everyone in your social sphere was interested in planning for their retirement and wanted to learn how to invest in the stock market. Now imagine that over the course of a year, some people get really good at it, stick to it, and attend courses three times a week to keep improving. Then imagine another group that skips a few of the very first courses, end up not going altogether for months, and make no improvement in their investment know-how whatsoever. Now picture those same no-goers deciding they want to give it another shot, but when they go back they’re surprised to see so many others who have become successful investors, proving that if you stick to putting in the time and effort you can see financial success. Is it in any way fair to say that the educational institution or its regular members are intimidating because they have seen success that the new-comers don’t have yet? Surely not! That same success could be theirs if they put in the time and effort, so how can it possibly be surprising that others who have are seeing that success? If anything, people should hope there are others who are more successful to prove that all the time and effort pays off!

If you were reading this and hoping for a more sympathetic article suggesting people should just stop getting into great shape, or wear baggy winter-weather clothes to cover up their results so others can’t see how in shape they are, you should find an Average Joe’s blog, not that of a fitness professional. There are behaviors that I do have strong opinions about when it comes to gym etiquette, but Average Joes are just as likely as Gymtimidators to violate those.

So what can you do if you feel gymtimidation from your local health club? I suggest joining a Planet Fitness, which is a gym literally designed to attract people who are out of shape (70% of adults), keep them out of shape, and keep them away from other gyms by making the membership only $10 a month. Average Joes would rather pay $10 a month and be able to say they have a gym membership, even though the only sweat and stimulation they get there is from the unlimited tanning and massage chairs.

The other thing you can do about gym-timidation is to have a reality check. Realize that you are the only one you can hold accountable for your body and how you feel about it. Some things you have no control over, but most things you do, so take responsibility for your own body and understand that fitness is a spectrum and some people are ahead of you, and some are behind you. If you are unsure how to move further along, consult a professional or an experienced friend to get some guidance. Just like learning to invest, or learning anything new for that matter, you have to start as a beginner and build on the success as you go. You should learn from the success of others who have gone before you, avoid those who bring you down, and be proud of every sign of progress along the way! YOU CAN DO THIS!